Theme and Variables: Scallops and Bollocks for Tea 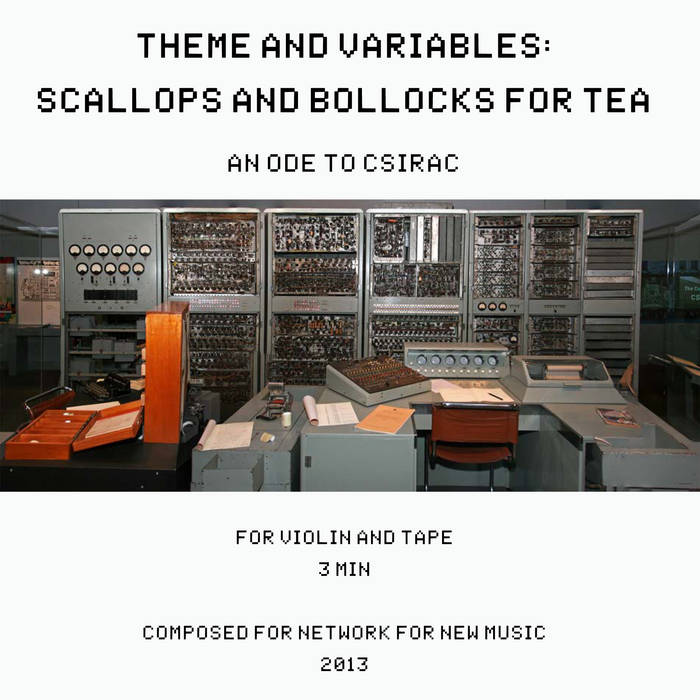 THE MUSIC OF CSIRAC

CSIRAC, one of the earliest computers, was developed and built during the late 1940's by the Australian Council for Scientific and Industrial Research (CSIR) in Sydney, Australia. One of the engineers working on the project, Geoff Hill, was also a musician, and in 1951 (possibly as early as 1950), he programmed CSIRAC to play some well-known tunes, making it the first computer in the world to play music. This was no small feat; because of the nature of CSIRAC's serial architecture, programming music into the computer was an extremely arduous process, and the code had to be introduced to the machine via punched paper tapes. Timing was especially difficult to master.

Among the first melodies played by CSIRAC was the Colonel Bogey March, composed by Lieutenant F. J. Ricketts in 1914. In the late 1930's, a British press officer Toby O'Brien augmented the march with the words "Hitler has only got one ball," and this was quickly adopted by wartime troops and the public. Since then, it has been a staple in the repertoire of everyone from Noël Coward to generations of English-speaking school children, and it appeared most famously in Malcolm Arnold's score for the 1957 film The Bridge Over the River Kwai.

CSIRAC's rendition of the Colonel Bogey March was never recorded, but in 2005 it was meticulously reconstructed and documented from the original paper tapes by composer and musician Paul Doornbusch (www.doornbusch.net). The sample used as the theme at the beginning of this piece is one of those reconstructed melodies, taken from CSIRAC's archived tapes, and used with Mr. Doornbusch's permission.

THEME AND VARIABLES was composed using sounds created by the Ricoh 2A03, the 8-bit microprocessor and programmable sound generator in the Nintendo Entertainment System video game console.

All sounds were provided by two VST synthesizers: